Hope lives in Mathare – thanks to you! (english version) 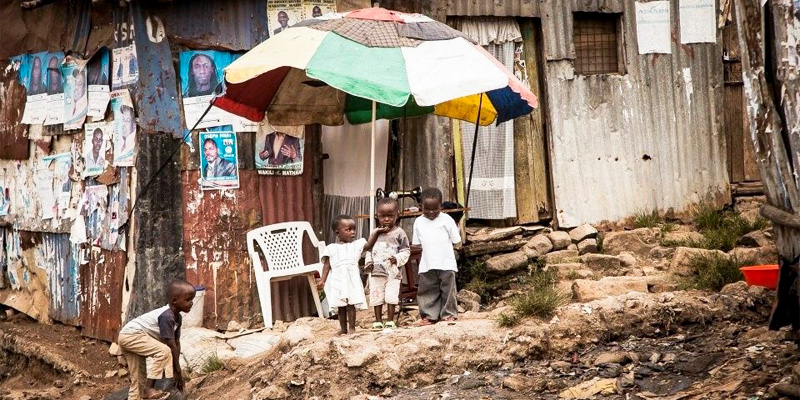 This year we do not want to send you Christmas presents, but this story instead. It is about irrepressible hope and the desire for a better future. In this story, we celebrate the heroes who work every day to help those who would otherwise have no chance. Because the money we would have normally spent on your Christmas gift will be donated in its entirety this year.

This story could be cruel and brutal. But thanks to your Christmas gift, it is not, and so at the beginning there is hope.

The place where hope lives.

Murder, rape, AIDS, hunger and burning mountains of garbage. There are few places in the world where there is so much desolation, despair and senselessness at the same time. The slums of Nairobi are the second largest in Kenya and among the harshest in the world. – And yet it is here that hope lives.

Feces, garbage and rust paint the picture of the slums of Mathare. In the Mathare Valley, about 206,000 people live in one of thousands of tiny shacks made of rusty metal, with rusty roofs, rusty walls and occasional rusty bridges in between. Even the earth, on which you mostly sleep with only cardboard boxes and on which not a single blade of grass grows, is colored rusty red.

At the edge of the picture, the red is mainly mixed with the brown of cardboard huts. In these live those who cannot afford to live in the Valley. Green is almost non-existent here. Only on the garish motifs of plastic packaging and other garbage, which lies everywhere on the streets.

Whoever wants to survive here leads a life under the most difficult circumstances. 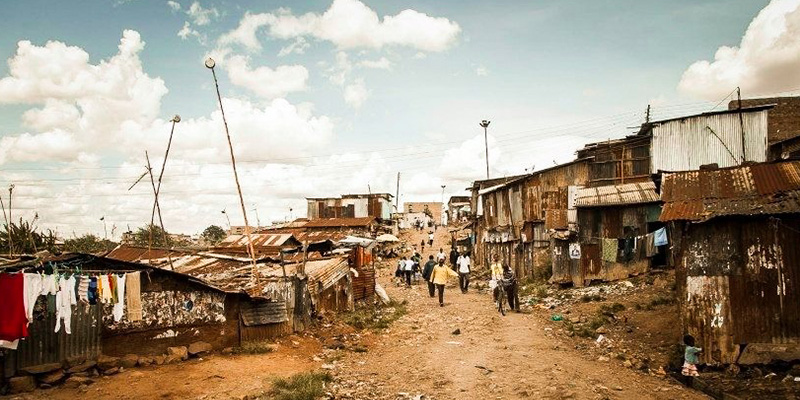 The way to a better future

The roads and streets are notorious for the violence, brutality and stench. Attacks by street gangs with machetes, knives and improvised weapons are commonplace here. On many days, there are no police on the scene. Many residents have complained about this for years.

„You pay for shelter, you pay for electricity, you pay for a toilet, and what do you get?“ says Morris Odek, a father of three, to a New York Times journalist. „Nothing.“

They are lucky in that. Because not all children have this chance. Although education in primary schools has been free in Kenya since 2003, the rate of illiteracy among the inhabitants of Mathare Valley is above average.

Many children have to contribute to the family’s livelihood, for example by collecting and selling garbage. Others are orphans and see it as their responsibility to take care of their younger siblings. The most frequent causes of death of their parents are usually AIDS or murder. But no one officially dies of AIDS in Mathare, even though nearly a third of the adults here are HIV-positive.

They don’t make it without support. Exploitation, violence and disease characterize the daily lives of these children. They slide into crime or prostitution, sniff glue or drink the notorious and health-threatening Changaa liquor, also called „kumi kumi.“ An 80-percent moonshine made from corn or millet, it contains both drinkable ethanol and the dangerous methanol. In addition, the brew is made from the heavily polluted water of the Mathare River, one of the many tributaries of the Nairobi River. Distilled in primitive distilleries, consumption can cause blindness or even death.

That’s why you hear Mathare slum dwellers say over and over again, „There are only three ways out of the slum: the first is death, the second is marriage, and the third is education.

„I used to hang around on the streets all day, collecting metal scraps to sell,“ says Godmark Odhiambo in an interview with freelance journalists from the 2 GTZ NGO. A kilogram of metal brought him the equivalent of just seven euro cents.

The alternative to life on the street is education. But those who have to eke out a living have other problems and usually have nothing to spare for formal schooling. 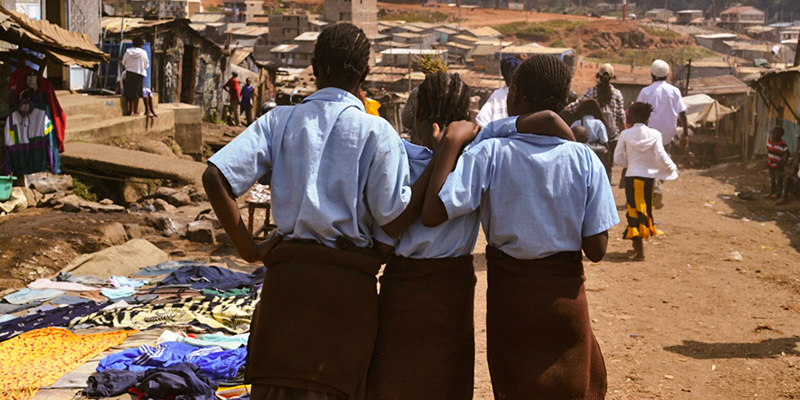 Mumo – grace in the face of despair

So why can these children laugh? Where does the joy come from? The children walk the paths through the alleys in school uniforms. Across the primitive canals, some bluish, others rainbow colored from spilled oil, to a place they are looking forward to. They are orphans or half-orphans and have only this one source of joy. There are no real windows there, no advanced facilities or modern materials for teaching, but as soon as the door opens, you see beaming children. This is the place where hope lives in Mathare.

Arriving at the Mumo Education and Orphange Centre, just over fifty children play, sing and laugh. The wooden staircase squeaks and creaks to get from the second floor to the second. Everyone is excited to acquire new knowledge. The thirst for knowledge is contagious and has something magical – somehow almost graceful.

You usually don’t have to look far to meet Christopher Ngombalu. He is the director at Mumo and makes sure that the children have this opportunity for education.

„Mumo is Kamba dialect and means grace. I got that name from my grandfather.“ Explains Christopher when asked about the name.

The school is a beacon of grace. It should always lead the children the way to a better future.

Not an easy job

Everyone who works here has their own story. The knowledge of steering the future of the little ones in the right direction drives them. Christopher himself teaches together with up to eight teachers. Of these, however, four are currently former students of Mumo themselves, who have made it their task to pass on this knowledge to the younger ones. But this work is not easy. The environment is difficult and there are new challenges every day.

If you look around the school, you quickly realize how high the need for many things is. Books, pencils, uniforms and lunch money. Because in addition to the lessons, the „Feeding Program“ has been launched. Because it is not easy to concentrate on an empty stomach.

Once a day, therefore, long lines form with eagerly waiting children. They hold plates in their small hands and grin from ear to ear. The mood is euphoric. Because now a cook is feeding them a hot, freshly prepared meal. For many, the only meal of the day. 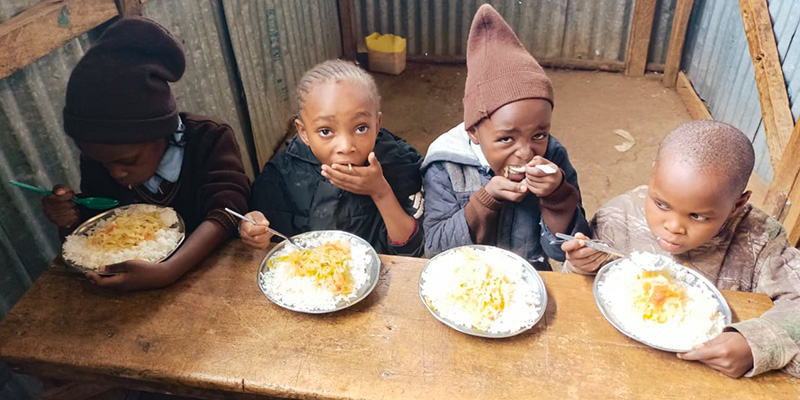 Here is a wish list of everything the school is currently lacking:

For very many people around the world, the Corona years (SARS-CoV-2) were and still are very bad. This is also true for the people in Mathare as well as for the staff and students in the Mumo. The food prices are constantly rising and for many no longer affordable.

This is where your donation has the most direct effect. Through the money we donated to Mumo instead of Christmas gifts like wine or chocolate, the „Feeding Program“ could be kept alive. Even more, it could be expanded. So even with the current very high prices, the children can be offered porridge in the morning. Here the prices for simple basic foodstuffs have more than doubled.

Thanks to you and the support that the children have experienced through you, it was possible to let this lighthouse shine even brighter. This is how hope lives on in Mathare for the children of the Mumo Education and Orphange Centre.

Why exactly this project and no other?

So much is happening in this world. Many things are painful to watch. Many very good projects of large and small Non-Governmental Organizations (NGO’s) deserve attention and financial support. Therefore, one could start in countless places and it would never be enough.

We became aware of the Mumo project through a customer. Through the personal conversations we learned a lot from Chris and the children, which broke our hearts.

That’s why we have been intensively involved with the project. We noticed particularly positively that more than 90% of the donations go directly to the school. This means that the help is sure to reach the children. The corresponding deductions are processing & transfer fees of the international financial transfer. No glossy flyers, no elaborate marketing, everything on a voluntary and 100% voluntary basis, just like this article.

That’s why we wanted to help right here. 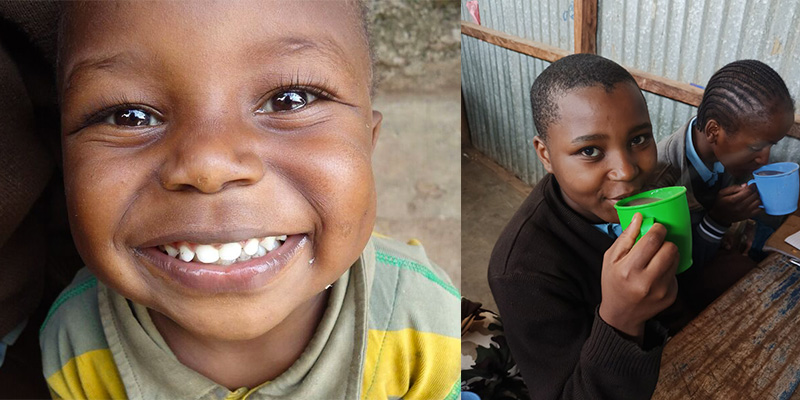 At this point, we would like to take a moment to say thank you again. Thank you for bringing this important project to our attention and for taking the time to read this article. Thank you also for supporting us voluntarily or involuntarily in this endeavor.

We would also like to thank the fantastic team of Mumo, which has been transparent and always ready to help us with the whole Christmas campaign.

If you want to support the children of the Mumo Education and Orphange Centre in the future, we refer you to the following pages

We wish you reflective holidays and a good start into the new year.